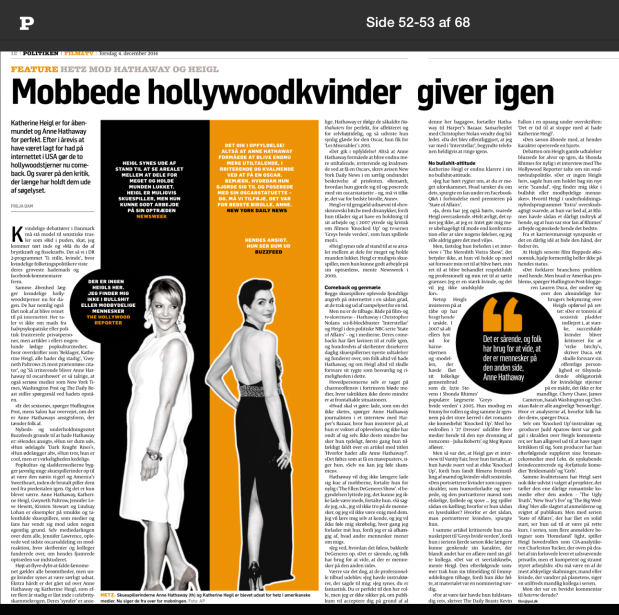 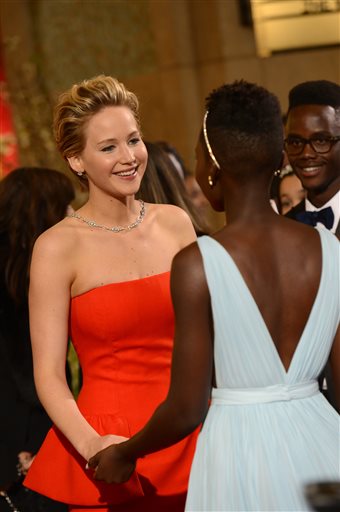 Jennifer Lawrence was the first to predict her own backlash. “Everybody is very fickle. They like me now, but I’m going to get really annoying really fast. Just watch,” the actress told Huffington Post in November.

She was right. Soon after, Vulture’s Jordan Hoffman expressed suspicion of Lawrence’s image as the genuine goofy girl, who’s too cool for red carpet interviews.

“Lawrence gives off the vibe of a woman annoyed by the endless repetition of a press tour, but she exploits it to perpetuate her status as a movie star that is nonetheless ‘real.’ Will continued scrutiny ever show that this lack of act is, indeed, just an act?” asked Hoffman, going on to invoke the media scheme her character in The Hunger Games, Katniss Everdeen, reluctantly takes part in: “Is Lawrence Katniss-ing us? And if so, how much longer until people get tired of the show?”

During the 2014 Oscar season, more pop culture commentators, bloggers and twitterers started questioning Lawrence’s sincerity and likeability. Was she becoming too full of herself? Were her charming fall-downs, photo bombs, and jokes about junk food too rehearsed? After the Oscars, CBC News hosted a community blog post called “Oscars 2014: Did Jennifer Lawrence stage her red carpet fall?” Salon’s Daniel Daddario wondered,”Are we in for a season of Jennifer Lawrence haters?” and Jezebel’s Phoenix Pho advised readers to “Brace Yourselves for the Jennifer Lawrence Backlash.”

This is the same actress who just a year ago couldn’t set a foot wrong. From listicles like Buzzfeed’s “The 16 Most Epic Faces Jennifer Lawrence Made On Oscar Night” and Jezebel’s “11 Reasons Why Jennifer Lawrence Is Your BFF in Your Head,” and gifs of her freaking out over Jack Nicholson’s flirting or spilling mints at a press conference to gushy glossy magazine interviews, the media carefully constructed her as America’s new sweetheart – the cool larger-than-life-down-to-earth girl next door that everybody adores. Charmingly clumsy and refreshingly direct, she wasn’t just a star. She was one of us.

Pop culture and celebrity mass media routinely build up young actresses as the next it-girls and America’s Sweetheart, before they tear them down again in a hateful way when the press gets tired of them. Gwyneth Paltrow, Kristen Stewart, Lindsay Lohan and Katherine Heigl are examples of beautiful and talented actresses whom pop culture/celebrity sites and fans have turned to revile for no good reason (Granted, Lohan hasn’t exactly been on her best behavior for the past decade.)

The rise and fall phenomenon applies to all celebrities, but only young women experience this degree of bashing, the flipside of unapologetic drooling. There’s plenty to criticize and celebrate about this year’s popular actors Matthew McConaughey and Jared Leto, but even though their unorthodox Oscar speeches were noted, the main conversation still revolves around their acting abilities.

From the beginning of time, women of all professions seeking acceptance and success have needed to live up to different standards than men. In the entertainment industry, these include being young, sexy and charming. It’s such a cliché, but it’s still true: Actors are reviewed by their acting; actresses by their acting and their looks and likeability.

These dynamics have probably always existed. –As Buzzfeed’s Anne Helen Petersen chronicles in “Jennifer Lawrence And The History Of Cool Girls,” actresses like Clara Bow, Carole Lombard and Jane Fonda were also once “cool” it-girls who lost their appeal with time. But in the digital world, the celebrity cycle is faster and more brutal. With the media mill’s constant pursuits of viral hits, the tone has sharpened, and the exposure of the Hollywood heroines has exploded. Exposure creates hype, followed by wariness and eventually hate. The Internet lends itself to public takedowns because it’s so easy to hide behind one’s computer screen, sometimes even anonymity, and the immediacy discourages reflection and doesn’t require a cool-down-from-irrational-rage period.

The main obsession about the up-and-coming actresses stems from a sexualization of young women that’s ever persistent in our culture. A fresh-faced beauty always makes us forget last season’s it-girl. Look at how newcomer Lupita Nyong’o received so much hype around the Oscars and the numerous articles on the alleged rivalry between her and Lawrence. Two months later, who even remember how to spell her name? Now, Emma Stone and Shailene Woodley make the covers and the talkshows, although Woodley is already experiencing a backlash after making unwise comments about feminism. Apparently there can be only one queen bee at a time. Women – including media consumers and contributors – are encouraged to compete about looks and sexuality. There’s a sense that if you bring another woman down, your own status rises. Men gladly add to the takedowns, without having to participate in the game themselves. Jared Leto, for example, commented, “You know, I’m starting to wonder if this is a bit of an act,” when Access Hollywood told him Lawrence tripped on the red carpet at the 2014 Oscars.

In addition to looks, the media evaluates actresses’ personalities. As a societal norm, women are perceived as more socially and emotionally intelligent. Traditionally, men deal with conflicts with physical power; women with charm. Women, stereotypically, solve problems at home and discuss feelings with their girlfriends. A male actor can be a mysterious cave man for all we care, while actresses are expected to make clever conversation, express emotions, and be nice, but not boring. Journalists write about their perceived or imaginary budding friendship with the stars because they expect an emotional connection with women, who, eager to please, often deliver.

The perception that women need to be nice, natural and self-effacing still rules. A man can have an ego; women need to know their place. A lack of – or “fake” – humility was one of the reasons why the previously celebrated Anne Hathaway became unpopular during the 2013 Oscar season, where the intensity of the love for Lawrence was only matched by the hate of Hathaway. There’s even a term for it: Hathahaters. Publications like The New York Times, New York Magazine and Polymic wrote articles asking “why women hate Anne Hathaway.” Buzzfeed’s answers: “Her face,” “She looks stupid,” “She ruined the Dark Knight Rises,” “She ruins everything,” “She thinks she’s cool when she’s really boring.”

“It came true! The fact that Anne Hathaway managed to become more unlikable, annoying and cloying by winning an Oscar, that is,” wrote the New York Daily News in a downright mean description of the event. “Observe the preening and posing with her Oscar statuette — and may we add, it was for Best Supporting Actress, Anne.”

The worst thing you can accuse an actress of is being cocky – what commentators are accusing Lawrence of right now – and overly ambitious, which tipped Hathaway to the dark side: she actually wanted to win her Oscar.

After the Oscars, Hathaway stayed out of the spotlight for a year and worked on an independent film with a friend.  ”I don’t want to bring up a sore subject or anything — I think my publicist is probably like ‘No, no no’ — but I had just taken a little bit of a beating from the Internet,” she told MTV at Sundance 2014. One can only hope that Jennifer Lawrence and the next generation of talented young actresses don’t have to hide away their talents in order to stop the hating.